Since 2007, an average of more than 20% of such allotted funds (as much as $1.5 billion a year) has gone unused annually because the system could not deliver equipment on schedule. As a result of this delay, the resources budgeted for defence procurement have been progressively deferred into the future. This occurred most recently with the 2016 federal budget, which shifted $3.7 billion in procurement funds into the future. This was the third time in six years a shift of this type occurred, and it brought the cumulative total deferred to more than $10 billion.

Adequate spending on new capital equipment is vital to ensure a modern, well-equipped military. This is especially important for air and naval forces which rely heavily on modern technology to produce combat effectiveness. For decades, the Department of National Defence (DND) has set targets for how much of the defence budget should be devoted to capital equipment, ranging from a high of 30% to a low of 20%. Due to the inability to use allocated procurement funds, the money spent on capital equipment has declined as an overall share of defence spending. Since 2011, an average of just over 14% of the defence budget has been spent on capital, a level unseen since the 1970s.

This continued inability to spend funds on procurement is especially problematic because of the extensive procurement backlog built up during the 1990s. These ongoing delays mean that needed equipment is not brought into service on schedule. This forces the Canadian Armed Forces (CAF) to operate elderly and sometimes operationally obsolete equipment longer than planned. In some cases, it has created capability gaps when aged equipment has been removed from service before it can be replaced. 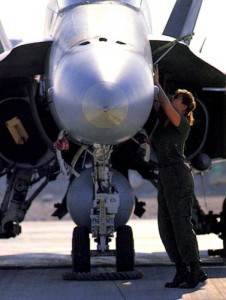 An aircraft technician performs a pre-flight check on a CF-18 Hornet in Qatar.

A second negative impact of an underperforming procurement system is the exposure of equipment budgets to the ruinous effect of inflation. The impact of inflation has been acutely felt in the shipbuilding program where annual cost escalation runs as high as 11% a year. As an example, Canada’s largest postwar procurement project, the Canadian Surface Combatant, is losing a million dollars’ worth of buying power for each day the project is delayed. Although the impact is especially critical for shipbuilding, the consequences are felt throughout the defence program as projects progressively lose purchasing power with every day they are delayed.

One of the central procurement problems of the last decade is a mismatch between the procurement workload and the capacity of the procurement system to maintain it. Tens of billions worth of capital equipment projects were added to the defence budget between 2005 and 2008. This transformed radically the workload of a system that had purchased few big, costly or complex pieces of equipment during the 1990s, but was now expected to procure, and quickly, new combat fleets for the Canadian Army, Royal Canadian Air Force, and Royal Canadian Navy concurrently. Even more problematic, the procurement workforce across government had been decimated by Program Review and spending patterns during the 1990s.

Increasing the capacity of the procurement workforce can be accomplished in three ways. First, its numbers must grow, ideally by bringing people with relevant prior experience into government. While efforts to do so were launched over the last year, they have languished. Changes or exceptions to the Public Service of Canada hiring process should be explored to address this. Second, the skill-sets of officials throughout the procurement workforce must be enhanced. Too often workers with inadequate training are moved into positions and expected to succeed, despite a lack of preparation. Sufficient training and career development opportunities must be made available to ensure success. Third, defence procurement should be considered a specialized, professional occupation within the government of Canada and treated accordingly. Frequent staff rotations and an inattentiveness to subject matter expertise may work well in other areas of government, but it is ill-suited to acquiring expensive, complex technology from a unique market.10 Across government, defence procurement positions should be staffed by experienced officials and given enough time in a position to develop the skills and experience required to be effective. The CAF should create procurement occupational classifications with their own promotion and career advancement tracks, selected from the top ranks of the military cohort in order to professionalize the military’s procurement activities.

Over the last decade, the limited capacity of the existing workforce has been further strained by the addition of numerous steps in the procurement process, as new governance structures and policies were layered on top of old. The impact over time has made it increasingly complicated to acquire equipment for the Canadian military, in part because the rules introduced to address problematic aspects of the most complicated procurements are applied across the board. Efforts to rationalize this complexity were launched within DND in 2011 and across government in 2014 with the Defence Procurement Strategy. The former effort revised DND’s process for authorizing only those defence procurements which can be approved by the Minister of National Defence, while no progress is evident on the latter initiative. The revised project approval process inside Defence should be extended to all defence procurements, and a revised procurement process across government should be examined. The changes made to the process of screening Syrian refugees could serve as a template, with a focus placed on finding activities that currently occur in a sequence which could take place concurrently.

A final measure that will help better align existing capacity and make better use of it once it increases, is a greater prioritization of DND’s planned equipment projects. Given the imbalance between existing project demand and the ability actually to execute, the Defence Policy Review must identify which major projects are priorities. Limited human resources have been spread too thinly across too many procurements, resulting in delay across the board. Focusing efforts on the projects that matter most, and devoting the effort to ensuring those are prepared for the needed senior approvals in a timely manner would allow the most important to move forward more expeditiously.

Beyond an increased ability actually to procure military equipment, significant improvement is also needed in how defence procurement is communicated to Canadians. Too little effort is currently devoted to explaining major purchases in a manner that articulates the rationale behind their enormous financial outlays and sets out realistic expectations about the difficulty associated with acquiring them. These communication shortcomings cause issues in the public eye, as projects which are unlikely to live up to the frequently unrealistic expectations seem set up for failure. In recent times, too often the government of Canada has either failed to discuss procurements or has done so only reactively. The resulting communication void is then filled by companies jockeying (understandably) for a corporate position in a way that creates a highly negative image around specific procurements and serves to undermine confidence in all defence procurement. More frequent and proactive communication of realistic and accurate information about specific defence procurement projects can help improve the overall perception of procurement. This would, in turn, reduce the likelihood of procurement files becoming issues that must be managed by what are inevitably risk-avoidant, and therefore slow, approaches.

Finally, the most important factor which could improve the state of defence procurement is a clear indication that acquiring military equipment matters to the government and senior leaders in the bureaucracy. Without such an indication, risk avoidance will predominate at the expense of procuring equipment. For this reason, the ‘deliverology’ approach embraced by the new government should be applied to defence procurement, and the focus placed on actual equipment delivery.

David Perry is the senior analyst and a Fellow with the Canadian Global Affairs Institute. He is the author of multiple publications related to defence budgeting, transformation and procurement. He often provides comment for Canadian and international media on defence and security issues.

David Perry is the Senior Analyst and a Fellow with the Canadian Global Affairs Institute. He is the author of multiple publications related to defence budgeting, transformation and procurement, including 2015 Status Report on Major Defence Equipment Procurements, Defence Budget 2015, and Putting the ‘Armed’ Back Into the Canadian Armed Forces. He received his PhD in political science from Carleton University, where his dissertation examined the link between defence budgeting and defence procurement. He was previously the Senior Security and Defence Analyst of the Conference of Defence Associations Institute and the Deputy Director of Dalhousie University’s Centre for Foreign Policy Studies where he remains a fellow. His research has been published in Defence Studies, Comparative Strategy, International Journal, and Journal of Military and Strategic Studies and he is a regular columnist for the Canadian Naval Review. He often provides comment for Canadian and international media on defence and security issues.