After a two-year delay, Canada’s Maritime Monitoring and Messaging Microsatellite (M3MSat) successfully headed for orbit above the earth at 11:55 p.m. (EDT) on June 21 – launched from the Indian barrier island of Sriharikota off the Bay of Bengal.

The M3MSat was launched by the Indian Space Research Organization along with Claire, another Canadian satellite owned by the Montreal-based GHGSat Inc.

The M3MSat mission will improve ship detection and marine traffic management in Canadian waters by testing new technologies including an innovative antenna designed by the University of Waterloo that promises improved identification of ships and better resolution between conflicting Automatic Identification System (AIS) signals in regions with high maritime traffic.

TheM3MSat was scheduled to launch onboard a Russia rocket back in 2014. However, the ruling Conservative government then aborted the mission due to Russia’s annexation of the Crimea and Russia’s support for separatist groups in Ukraine.

A lack of available rockets, delayed subsequent efforts by Canada to launch the satellite.

“The launch of M3MSat and GHGSat’s ‘Claire’ will test technological advancements in important fields,” said Navdeep Bain, minister of Innovation, Science and Economic Development. “While M3MSat will help our country better manage navigation in Canadian waters, Claire aims to improve our understanding of industry’s impacts on our environment.” 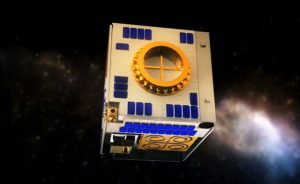 The M3MSat was developed jointly by the CSA and Defence Research and Development Canada (DRDC) to meet complementary objectives;

Once commissioned, the satellite will be owned by DRDC and operated from the Satellite Operations Centre at CSA headquarters in Longueuil, Quebec;

The CSA is testing new instruments on M3MSat. One ensures data continuity on the passage of ships in remote areas when AIS receivers cannot provide live coverage, and the other will measure static energy accumulated in satellites’ electronics to improve the way we monitor the health and safety ‎of satellites.