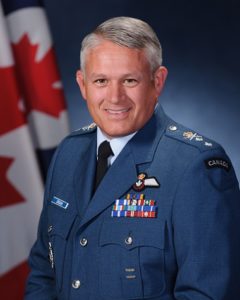 Drouin served as a member of the Strategic Joint Staff as the coordinator for director current operations. Drouin commanded JTF-Afghanistan Air Wing – TF SILVER DART from November 2009 to September 2010 and then immediately assumed Command of 1 Wing (AVN BDE). Throughout his career which began in 1989, Drouin has logged over 4000hrs Tac Hel flying time mainly on the CH-135 Twin Huey, the CH-136 Kiowa, and the CH-146 Griffon.

“Let me say how fortunate and proud I am to return to the home of RCAF operations in Winnipeg. 1 Canadian Air Division and the 12 RCAF wings under it serve a critical role in providing air power in support of all Canadian Armed Forces operations,” Drouin said in accepting his new post. “I look forward to this amazing opportunity to command such a great institution and the dedicated men and women in its service.”

Drouin was promoted to his current rank on May 24th, 2016, and appointed Commander 1 Canadian Air Division/Canadian NORAD Region on June 21st, 2016.

“Responsibility for all RCAF operations is a huge undertaking and 1 Canadian Air Division has thrived under Maj. Gen. Wheeler’s leadership. Notwithstanding a high tempo of operations here at home and abroad, General Wheeler kept the RCAF flying in formation with our joint partners and allies. As Major-General Drouin takes command, I know that we will continue to project the air power needed to meet RCAF’s challenges worldwide,” said Lt. Gen. Michael Hood, commander Royal Canadian Air Force, who presided over the turnover ceremonies.

“I’m pleased to hand this command over to Maj. Gen. Drouin and I leave this post with complete confidence our people are in highly capable hands,” out-going 1CAD commander, Maj. Gen. David Wheeler said.

Before this appointment, Major-General Drouin was the Deputy J5 Strategy, Policy and Plans at the North American Aerospace Defense Command (NORAD) and U.S. Northern Command at Peterson Air Force Base in Colorado. Major-General Wheeler will lead the Canadian Armed Forces Targeting Implementation Initiative at the National Defence Headquarters in Ottawa. 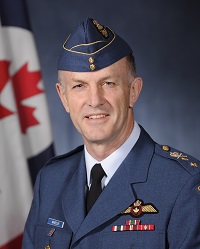 Following the awarding of pilot’s wings in March 1989, Drouin was successively posted to 430 Tactical Helicopter Squadron (430 ETAH) in Valcartier, Québec, as a line pilot. He was then posted to 403 Helicopter Operational Training Squadron in Gagetown, New Brunswick, as an Instructor Pilot. He was also part of the Griffon helicopter fielding and implementation team to include the fielding of the CH-146 Griffon Flight Simulator.

In 1990, Drouin deployed to Central America as part of the 89th Rotary Wing Aviation Unit to assist in the demobilization of the Contras in Nicaragua (ONUCA). In 1997, he was promoted to major and posted to 1 Wing Headquarters (HQ) in Kingston where he assumed the Wing Standards Officer position. From 1999 to 2003, he was posted back to 430 ETAH where he served as the Operations Officer. Then from December 1999 to June 2000 he was the Deputy Commander of the Kosovo Rotary Wing Aviation Unit.

In 2001, he commanded the Canadian Helicopter Detachment in Bosnia-Herzegovina. In 2002, for six months, he was also privileged to assume command of 430 ETAH. In 2005-2006, he was deployed to Kabul, Afghanistan as part of the first Strategic Advisory Team. From 2006 to 2008, Drouin had the honour and privilege of commanding 427 Special Operations Aviation Squadron out of Petawawa, Ontario.

In Aug 2013, he was promoted to Brigadier General and became the Deputy Commander Force Generation at 1 CAD/CANR in Winnipeg. In June 2015, he was posted as the Deputy Director of the Strategy, Policy and Plans Directorate North American Aerospace Defense Command (NORAD) and the United States Northern Command (USNORTHCOM), Peterson AFB, Colorado.