Three CH-146 Griffon helicopters were sent to Iraq an all-source intelligence centre was established in the country as part of the Canadian Armed Forces’ expanded contribution to defeat the Islamic State of Iraq and the Levant (ISIL).

The deployment is part of Operation IMPACT, the CAF’s contribution to the Middle East Stabilization Force (MESF) – the multinational coalition to stop and degrade ISIL. Under Operation IMPACT, the CAF conducts air operations, provide training and assistance to Iraqi security forces, provide capacity building capabilities to regional forces and support the coalition with skilled personnel.

“The all-source intelligence centre will enhance our situational awareness along with that of the Coalition,” according to Gen. Jonathan Vance, Chief of the Defence Staff, “ Griffon helicopters will provide effective in-theatre tactical transport, and will enhance the capabilities of our trainers in Iraq. All of these Canadian assets will make significant contributions to coalition operations.” 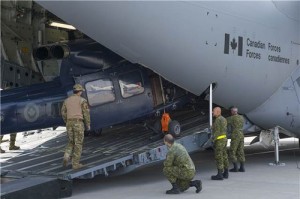 The helicopters will also be used for medical evacuation. The Griffons and their crews excel in the tactical transportation of troops and materiel. A variety of self-defence weapons is fitted to the aircraft for the deployment.

“Canada’s expanded mission is setting the conditions for Iraqi security forces and regional partners to achieve long-term success by enabling them to effectively plan and execute military operations aimed at defeating ISIL and improving security and stability in the region,” said Defence Minister Harjit Sajjan.

We Talked About This!

As a part of Joint Task Force-Iraq, the CAF officially opened an all-source intelligence centre. The centre will be responsible for collecting, synthesizing, and analyzing information derived from a variety of sources. This intelligence is then used to inform operational planning, ultimately contributing to the protection of coalition forces and the conduct of coalition operations.

The additional tactical aviation, intelligence and training personnel are part of Canada’s enhanced mission that will eventually see around 830 CAF members deployed as part of Canada’s contribution to Coalition efforts to improve the security of Iraq and the region. These adjustments of personnel and capabilities are expected to be completed by late summer.