“I am very pleased to officially open this new facility,” Col. Daniel MacIsaac, Commander 5th Canadian Division Support Base Gagetown, said during the opening ceremony. “It will contribute to the success of our mission by enabling the work of our professional maintainers to keep the equipment functioning at its optimum capacity, and to keep the training mission on target.’’ 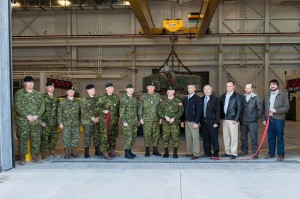 The Leopard II is heavily protected against direct fire enabling it to continue to be relevant on the modern battlefield. The tank  has proven itself as a deterrent to attacks and has allowed Canadian soldiers to safely cross terrain impassable for wheeled vehicles. The Leopard II is a key element of the warfighting capability of the Canadian Armed Forces.