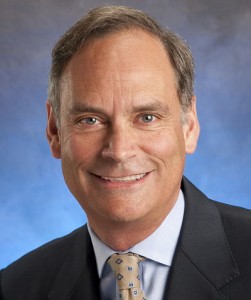 In continuing our Game Changers series, today, we are profiling another industry innovator – Tim Page, Vice President of Government Relations at Seaspan Shipyards.

Seaspan Shipyards is one of Canada’s largest and fastest growing shipbuilding companies. In 2011, Seaspan won an $8 billion shipbuilding opportunity under the National Shipbuilding Procurement Strategy. Following that, the company’s workforce grew from 1,200 in 2009 to 2,300 today and the company is still hiring.

Tim is responsible to build and maintain Seaspan’s relationship with the federal government.

Vanguard Magazine: Tell us how you started out in the industry and what’s brought you to where you are today?

Tim Page: I started out as the son of an officer, in the Royal Canadian Navy, with an abiding respect for and commitment to service to country and to all those who put themselves in harms way to protect and preserve our way of life. That’s what makes my involvement with Seaspan Shipyards so important to me personally. We build ships for the Canadian Coast Guard and the Royal Canadian Navy under the National Shipbuilding Procurement Strategy.

VM: Now, what is your role in your organization today?

TP: I am responsible for Seaspan’s government relations with the federal government and there are a surprising number of departments and agencies with which we have a relationship as we manage our business interests and those of our federal customers.

VM: Can you share with us what was your “aha” moment or an epiphany that you think will resonate with our readers? Can you tell us about that story?

TP: Back in 2008, the new Conservative government produced the Canada First Defence Strategy in order to recapitalize the Canadian Armed Forces to meet the country’s defence and security objectives for the 21st century. At that time I was working with CADSI, we tried to encourage Canada to leverage that intended spend of several hundreds of millions, in fact, billions of dollars, to maximize opportunities for Canadian businesses to participate.

Along the road, there were lots of different interests that were able to align with the principle and the object of this inside and outside of government of what ultimately became known as the Defence Procurement Strategy.

VM: What habit has contributed to your success?

VM: What is the best advice you ever received?

TP: Be brief, be good, and be gone. Do your homework, speak truth to power, and believe in what you are doing while you are doing it.

VM: What can our readers take away from this discussion?

TP: Good question. I would suggest that there’s no real substitute for long-term relationship building and management. No quick fixes. It’s a process. Stick to the process. Be committed to the process. Do something that you’re passionate about and others will be passionate about it too. Commit to hard work and to excellence. At the same time make sure you’re being yourself. Be real. Challenge yourself and those around you. You’re likely to be surprised by the success and the fun you can have along the way.

VM: What is your parting piece of advice for our readers?

TP: You only live once. Don’t wait for someone to tell you what to do. Go out and make it happen.

VM: We’d like to know a little bit more about Seaspan. Can you share with us how your organization is changing the game within the industry?

TP: Yes. First of all, we’re not doing it alone. We are doing it with an eye on a long-term partnership with both the Federal and Provincial governments. Thanks to the National Shipbuilding Procurement Strategy we are creating a west coast shipbuilding center of excellence. Developing an ecosystem of suppliers, academic and training institutions and other stakeholders around it. This will mean jobs and economic activity for many years to come.

It may also open the door for our supply chain to compete for international business down the road as the ecosystem grows, as it does for Seaspan’s Victoria Shipyards which will soon be contributing, I think you know, to a refit to the Royal New Zealand Navy ANZAC class frigates.

VM: How has innovation become ingrained in your organization’s culture and how is it being optimized?

TP: We’re using lean design and design for production techniques which are now firmly ingrained in the Seaspan business model. Including the use of 3D modeling which allows us to test a vessel’s design before we begin to build it. If you will, by the time we construct the vessel we feel like we have already built it once already, thanks to the 3D modeling work we’re doing.

VM: What technologies or business models or trends do you think will drive the biggest change in industry over the next two years?

TP: It is our fervent hope that the biggest trend will be the uninterrupted flow of work resulting from NSPS which lays out a 20 to 30-year program of work to recapitalize the Canadian Coast Guard and Royal Canadian Navy. Seaspan is proud to have won the opportunity to build the noncombat package of work under NSPS.