The Canadian Coast Guard (CCG) has long been an iconic institution for those who live and work in Canada’s maritime environment. Today, through the National Shipbuilding Procurement Strategy (NSPS), it has a golden opportunity to re-invigorate public attention and enhance its well-earned recognition for its mission.

By re-equipping the CCG with its next generation of science, icebreaker and patrol vessels, NSPS is enabling it to promote Canada’s economic and security interests, protect our marine habitat, ocean environment and the safety of mariners who work in Canadian and international waters. The new Liberal Government has recognized the importance of the Coast Guard’s work by including its name in the job description of the new Minister and highlighting fleet recapitalization as a priority in the Minister Tootoo’s mandate.

NSPS was inspired by a desire to avoid the boom and bust cycles that have defined previous federal shipbuilding programs and should be applauded for its vision and its promise of strategic value to Canada – having ships for Canada’s federal fleets built in Canada, by Canadians. The apolitical, competitive process through which it was managed has been widely hailed by federal parties and independent assessments as being objective, transparent and fair in its outcome to select two shipyards to recapitalize the Canadian Coast Guard and Royal Canadian Navy fleets into the future. 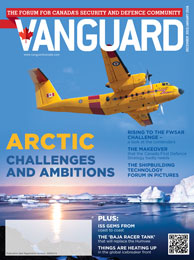 Seaspan is proud to have won the NSPS competition to build Canada’s non-combat fleets which include an initial total of 17 vessels – seven of which were announced in 2012 and ten additional vessels were committed to by the then PWGSC Minister Diane Finley in October, 2013. Fifteen of the seventeen vessels are for the Canadian Coast Guard. We are committed to building a long-term relationship with the Coast Guard to build their ships, contribute to the rebirth of a storied sector of the Canadian economy, and indirectly bring public attention back to the CCG.

It was the NSPS promise of a predictable, long-term flow of work that gave us the confidence to invest $170 million of our own money to build the most modern, purpose-designed and built ship-manufacturing facility in North America that is now producing the first Coast Guard vessel – the Offshore Fisheries Science Vessel (OFSV). It will be the sustainment of Canada’s long-term commitment to NSPS and the relationship that the CCG is developing with Seaspan that will strengthen the competitiveness of companies in the marine sector, generate jobs at home, and give confidence to young Canadians to follow their dreams into the shipbuilding and ship repair sector.

NSPS is contributing directly to Canada’s industrial mosaic;  autos for Ontario, aerospace for Quebec, and ships for each coast – providing high tech jobs across the country, exportable supply chain opportunities for the marine sector, and the opportunity of exciting manufacturing careers for our youth for decades to come.

Seaspan is playing its part through a co-operative program for engineering graduates from the University of British Columbia (UBC), a West Coast Aboriginal Apprenticeship program and an Industrial Marine Training & Applied Research Centre.

For the CCG, NSPS opens a new chapter for it to support Canada’s maritime ambition. The Polar Icebreaker is an important pivot to the program of Coast Guard work. This vessel will signal Canada’s return to the forefront of icebreaker design and production, renewing an essential element in the assertion of Canadian sovereignty in the North and protection of its Arctic environment. The Polar Icebreaker will establish the basis of design and production capability for the follow-on program of CCG icebreaker building.

Put simply, Seaspan is excited to be the Coast Guard’s partner for this work.

Seaspan is planning to use the design, production, and supply chain capabilities being developed through NSPS to support our pursuit of other government and commercial business into the future, including that of BC Ferries. Although the backlog of federal fleet work precluded Seaspan from bidding on the current mid-size ferry procurement, the capabilities being generated through NSPS will ultimately position Seaspan’s Vancouver Shipyards to offer the tax-payers of BC a compelling future alternative to offshore procurement, ensuring the economic, long-term sustainment of vital ferry services as a core component of BC prosperity.

In summary, NSPS has provided the spark for Canada to think about its maritime future with renewed interest and ambition for the long term. Four years into its existence, NSPS is producing tangible results on Canada’s west coast. Seaspan is committed to the success of NSPS and is busily delivering to its customers, the Canadian Coast Guard and the Royal Canadian Navy.

Tim Page is vice-president for  government relations at Seaspan Shipyards