Scrapping the F-35 fighter jet program was one of Prime Minister Justin Trudeau’s campaign promises, but yesterday Defence Minister Harjit Sajjan said the aircraft from Lockheed Martin will not be cut off from any upcoming competition for replacements for Canada’s aging CF-18 jets.

The former Conservative government’s 2010 plan called for the purchase of 65 units of the radar-evading F-35 warplanes for $16 billion over a period of 20 years was just too expensive. After the auditor general and parliamentary budget officer figured in operations and sustainable costs it was estimated that the price of ownership over 42 years would be $44.6 billion. 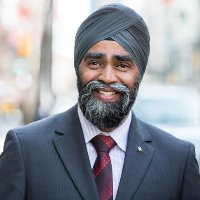 During his campaign for office, Trudeau said he would not approve the F-35 deal but instead hold an open competition for a CF-18 replacement and plow in the savings from the stealth fighter program to the Navy.

At a conference call from Iraq Monday, Sajjan was asked twice if the government was excluding the F-35 from open competition for a replacement aircraft.

The defence chief “ducked the question,” a report filed by the Canadian Press said.

However, Sajjan reiterated that the government will hold an open competition to find an aircraft that will replace the CF-18.

“My focus isn’t about F-35 or any other aircraft,” he said. “We will open it up to an open process.”

In November, the federal government has created a new office to handle the thorny issue of fulfilling the Liberal’s promise to scrap the F-35 multi-role combat aircraft program while seeking a cheaper replacement for the military’s CF-18 fighter jets.

Paula Folkes-Dallaire, a senior officer from the Fisheries department was named Monday as senior director of the Future Fighter Capability project which will be run under Public Services and Procurement Canada, according to a report from the Ottawa Citizen.

Folke’s-Dallaire’s team will be working with the National Defence as well as the Innovation, Science and Economic Development Canada “to implement the government’s direction,” according to a Public Services and Procurement Canada spokesperson.

It appears the government intends to revisit the basic requirements originally drawn during former Prime Minister Harper’s time in office and come up with a new set of requirements for a replacement aircraft.

“Right now we are going through the process where you build the right requirements from that,” Sajjan said. “And from those requirements there will be a certain capability and we will open it up to an open process and from that, a decision will be made for a replacement of the F-18.”

In the United States, the Pentagon announced that Lockheed Martin won a contract worth US$1.17 billion to buy titanium and other materials to manufacture the 11th batch of F-35 fighter jets, the Pentagon said Monday.

According to the Pentagon, the company has met its 2015 goal of delivering 45 F-35 jets to the U.S. government and allies. Last year Lockheed Martine delivered 154 F-35 jets. The company is on track to mark a milestone for its $391 billion F-35 project.

The company is preparing for more production and is expected to soon receive most associated performance fees, according to a report from the news service Reuters.

Lockheed Martin is in discussions with the Pentagon regarding another deal worth $15 billion for two batches of F-35 fighter jets. The agreement for that deal was expected by the end of 2015.