The National Shipbuilding Procurement Strategy has come under fire in recent weeks, however, Patrick Finn, assistant deputy minister, materiel, at the Department of National Defence, expressed confidence in the plan saying it will foster the growth of the Canadian shipbuilding industry(See the exclusive video interview below!). 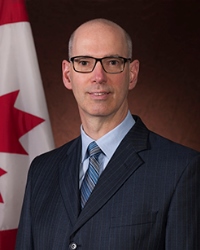 Speaking at the Shipbuilding Technology Forum 2015 in Ottawa yesterday, Finn also took exception to the notion that having the Navy and Coast Guard built in Canada is a primary reason why the vessels end up being very expensive. The event was presented by the Shipbuilding Association of Canada and Vanguard Magazine and held at the Borden Ladner Gervais office in downtown Ottawa.

“Canada is said to be not competitive and cannot be competitive and that vessels should be built offshore. This is a view that I do not share,” the ADM said. “…I also believe that the shipbuilding strategy is an enabler that will not only help us rebuild naval capability but also strengthen the local shipbuilding industry and even open up export opportunities for Canadian companies.”

This year’s theme for the forum was “Preparing for Growth through Export.” Other presenters included John Schmidt, vice president of Chantier Davie Canada Inc., Lee Carson, president of Norstrat Consulting In., as well as other experts in various areas of shipbuilding.

(Stay tuned because, in the following days, Vanguard will feature videos and articles of the event and the presentations )

The NSPS, which was introduced by the Conservative government in 2010, earmarked some $39 billion to renew the fleet of the Royal Canadian Navy and the Canadian Coast Guard. The program, however, has been dogged by controversy focusing on projected cost overruns, delays, and contract issues. The warship component of the program is on course to overshoot its budget, according to an independent analysis of the program.

Government to hire outside help in fixing shipbuilding procurement system

Is the NSPS headed for troubled waters?

Finn countered that some of the reported cost overruns include projections on projects that have not yet even been contracted out or that ship designs have not even been approved. He also said the strategy will help prevent the debilitating boom-and-bust cycles in the local industry by providing more predictability in shipbuilding projects and building an industry infrastructure.

“We are moving away from the practice of batch-by-batch shipbuilding into a more predictable and sustainable environment in terms of spending,” he said. “If we can build an infrastructure where technology and knowledge from previous projects are retained in the country, shipyards will not need to reinvent the wheel each time they work on a new project…we can cut time of delivery and lower cost.”

He also urged industry to the strategy’s potential.

“Look at what we have all accomplished in the first four years of this 30-year program,” Finn said.

For instance, the modernization project for 12 Halifax class anti-submarine frigates of the Navy did not only result in the addition of new capabilities such as enhanced radar, new electronic warfare systems, upgraded communication and integrated missile systems.

“The project was recognized internationally,” Finn told Vanguard. “The New Zealand Ministry of Defence has approached us for assistance in their decision to upgrade the combat systems of their ANZAC-class ships…the work done by Canadian companies for the Halifax program will now become these companies’ calling card for future export opportunities such as this.”