The US is using tech that could secure Canada’s Arctic

One of the cornerstones of the United States’ future systems is its cooperative engagement capabilities. This is a concept that Canada could no doubt benefit from as well. The whole point is to create a fully interconnected system that shares and updates information in real-time to forces on the ground, on the water and in the air.

The Naval Integrated Fire Control – Counter Air (NIFC-CA) system for the United States Navy (USN) is one such system. NIFC-CA uses a combination of platforms to provide real-time tracking of threats and enables defensive operations to be conducted with far more accuracy and potency in conjunction with strike missions. The backbone of this system are the AEGIS ships (which carry the SM-6 missile); they can be adapted for anything from cruise missile interception to incoming aircraft to striking land targets. 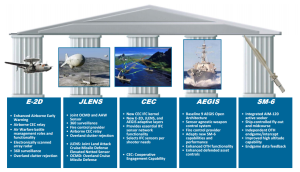 The system’s main platforms are the E-2D Advanced Hawkeye, the Joint Land Attack Cruise Missile Defense Elevated Netted Sensor System (JLENS), Cooperative Engagement Capability (CEC), AEGIS system and SM-6 Missile. Together, this “system of systems” can gather, disseminate and use massive amounts of data (information) in order to formulate the correct response to a real-time threat faster and more efficiently that a human might be able to — at least, in theory. 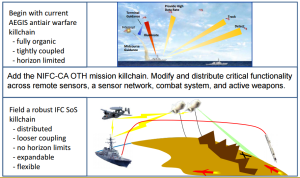 This is why the F-35 in particular is being outfitted with such advanced sensors and missile tracking capabilities. All of these systems can be combined to make a much more resilient defense system and create standoff engagement opportunities that were once impossible. 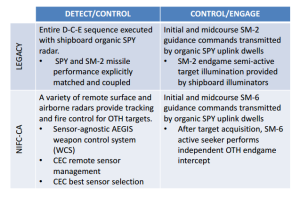 With regards to the Canadian Arctic, a system similar to the NIFC-CA could prove to be very valuable. Having AEGIS-equipped ships as well as JLENS blimps in the Arctic would go a long way to defending us from cruise missiles and other airborne and ship-borne threats. When used in conjunction with something like the proposed Polar Hawk variant of the Global Hawk UAV, Canada would be capable of monitoring Arctic activity 24/7. In addition, we could also substitute the F-35 for the E-2D — to a degree — as its sensors are incredibly advanced. This would allow it to be utilized as an AWACS platform of sorts, which has the added benefit of self-defence.

The Arctic will be an area of increased tension over the next decade and it’s only going to escalate further as the ice recedes and more and more resources are revealed. We need a 24/7 surveillance capability that also gives us multiple engagement capabilities. That means we need to start investing in a proper naval fleet, proper defense systems, proper fighter jets and UAVs/UCAVs. There is much work to do.

Canada is no longer neighbouring a Russia that has limited military funds and an old and deteriorating fleet. We’re next door to a Russia that has increased investment in its military by billions of dollars each year, modernizing all elements within its air force, navy and army.

We are living in a vastly different world compared to the relative calm that followed the Cold War. Threats are evolving at a rapid rate and the Russians are planning on having their first two carriers operating by 2019. You can certainly bank on one of those carriers making their way to the Arctic shortly after completion to send a strong message to other Arctic nations.

The reality of 2015 (and the foreseeable future) is that the only way to ensure peace in addition to the protection of resources is to have an engagement capability that, at minimum, matches the greatest threat another country can pose. If we’re going to sit at the table and tell Putin with a straight face that we’re open to cooperation in the Arctic and other areas … but any unfriendly action will result in strong consequences, than we’d better have the tools to back-up our claims.

Too many people view the military as a tool with which to kill in the name of political gain. The military serves a defensive purpose as well. We simply haven’t had to witness that for ourselves — at least, not yet. Now is the wrong time to be shying away from military spending. That’s not paranoia; it’s understanding how the world works and how it’s changing.