The Replacements, Part 6: Rafale for Canada?

The Rafale was developed after a disagreement pushed its manufacturer, Dassault, from the early stages of the Eurofighter Typhoon program. France insisted that the SNECMA powerplant be used and backed out when the UK insisted on their own powerplant. At that point, Dassault set out to design its own fighter aircraft and have been updating it since.

The Rafale was Dassault’s attempt at creating a true “omnirole” fighter, and the most recent iteration lives up to that designation quite well. The canards are placed closer to the wing to improve subsonic maneuverability and high angle of attack (AOA) performance. It also reportedly improves low-level stability at high speed. The Typhoon was supposed to make use of this canard layout but the placement of the intakes, designed to accommodate future thrust vectoring capabilities, made it an aerodynamic issue that couldn’t be overcome.

The Rafale’s layout increases its capabilities in a dogfight and seemingly gives it an equalizer when dealing with aircraft like the SU-27 and SU-35, both well-known for their capability in a WVR engagement. What makes the SUs particularly deadly is their combination of the F-15’s raw power and speed and the Super Hornet’s control at low speed and high AOA.

The Rafale also contains the advanced SPECTRA suite; it’s still highly classified by Thales so it’s anyone’s guess what its true capabilities are. The scanty info that currently exists on SPECTRA suggests that it has an advanced suite of sensors and makes use of sensor fusion to create 360 degree situational awareness for the pilot. It also reportedly makes use of an advanced internal, all-aspect jamming system which is said to enhance its signature reduction properties.

Thales is also reportedly working with similar Gallium nitride (GaN) technology as Raytheon to not only enhance the range of the sensors, jamming and radar systems but lower maintenance requirements and heat generation.

This has great appeal in the sense that Thales could potentially have F-35-type sensor performance while making use of all-aspect jamming capabilities that won’t reach the Growlers until 2020. It’s also internally mounted, versus the payload reducing hardpoint attachments used by the Growler’s. The F-35 will likely never have internal all-aspect jamming by the time Raytheon can shrink the internal systems to fit the airframe. The final forms of the RQ-180 and Taranis drones will likely be online and will likely receive that tech instead. 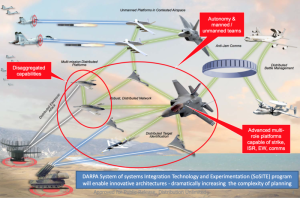 DARPA’s proposed Systems of Systems Integration Technology and Experimentation (SoSITE) showing a glimpse into the F-35 and F-22’s future along with US emphasis on integrated battlefield systems.

The French Senate recently released the actual fly-away cost for export models of the Rafale C (single seat) and Rafale B (dual seat) variants. The per-unit costs include VAT and were $83.6 million for the C and just over $90 million for the B. (Those totals are converted to Canadian dollars) The flight hour cost was pegged at $19,000 during combat operations in Mali and would, of course, be less outside of combat. However, even at $19,000 per flight hour, that’s right in the range of the F-15 and F-16.

The Snecma M88 engines give the Rafale the capability to climb to 40,000 feet in under two minutes and enable it to carry a significant payload. The Rafale is capable of sustaining 9G turns and has hit turns as high as 10Gs during demos, according to reports. When fully loaded with 6,000 liters of fuel in three external tanks, four air-to-air MICA missiles (987 lbs) and two SCALP cruise missiles (5,732 lbs), the Rafale sees its sustained turn rate drop to 6Gs.

The Rafale has shown its ability to supercruise at 1.4 mach in its air superiority configuration with a combat radius of 1,850 kms without the need to refuel. This was done carrying six MICA missiles. The American AIM-120D AMRAAM is rumored to be compatible as the Meteor missile the Rafale will carry is designed to be compatible with AIM-120 type rail and eject launch systems. The Rafale is actually very similar to the F-15 E and Silent Eagle with regards to max range and max payload. It also has an excellent all-weather, low-level terrain following radar capability that gives it some added appeal on the air-to-ground front over the other choices. 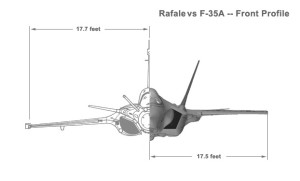 The Rafale’s front profile compared to the F-35.

The Rafale is actually compatible with many NATO munitions and has also been designed as a nuclear capable fighter. It’s able to use the ASMP-A nuclear ramjet missile, and while that particular missile is not available for export, it is a testament to Rafale’s ability to resist the electromagnetic radiation released from a nuclear detonation.

The aircraft’s “probe and drogue” refueling system is also fully compatible with the RCAF’s CC-150 Polaris refueling system — a welcome capability as it avoids costly modifications to an already costly and ageing airframe. It is also capable of landing on, and operating from any American carrier just like the CF-18’s.

The Rafale comes with advanced sensor fusion capabilities but as previously stated they are all speculation. From everything I have read the system sounds like it has airframe-mounted sensors that work similar to the F-35’s DAS but again, no proof exists.

Moving on to the Rafale’s cockpit, it is a very interesting place; depending on the pilot, you will no doubt get differing reviews of the system. Indeed, some of the Rafale’s detractors point to its layout as inferior because certain pilots have publically stated that they don’t like it.

On the flip-side, supporters of the aircraft speak of its pilot-friendly and highly functional layout. The other huge factor for me is the offer of final assembly and technology sharing like the Typhoon. The economic benefits somewhat offset the higher cost relative to the Super Hornet and Gripen, and make the Rafale attractive on a few more levels.

Coming to the end of this series, the one conclusion I have come to is that regardless of what any of us think, there are cases to be made for every single one of these aircraft as the replacement of choice. I quite frankly still favor the Typhoon and Gripen (NG), but the Rafale is something that I’m having a tough time dismissing. It isn’t hard to see why others may favour a different aircraft.

With that in mind, the only valid way to decide is to hold an open and transparent competition to see what each manufacturer offers, and how their offerings stack up with regards to performance under the mission parameters they will be expected to cover and how they hold up to the abuse of operating in the Canadian Arctic.

Now that this has come to a close, what’s your choice? How do you feel about the concept of holding an open competition?