“OSI is known globally for its expertise in providing military integrated bridge systems for new build and retrofit projects,” said Ken Kirkpatrick, President and CEO.  “We are proud to be working with Davie and Project Resolve and to be part of this truly Canadian experience from East to West.  This event marks another major RCN project in which we are involved, and with OSI comes 100% Canadian content and expertise.” 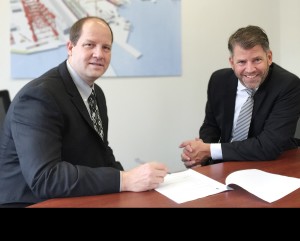 “We are delighted to have OSI in our Pan-Canadian team,” said Spencer Fraser, CEO of Project Resolve Inc. “OSI has fantastic technology with a proven pedigree. They have their navigation equipment on all RCN warships including the RCN’s subs and have exported their solutions to 20 navies globally. They are a true Canadian success story!”

“This is the same technology that is being used on the AOPS program”, Mr. Kirkpatrick stated.  “Using pull-through technology drives commonality across the RCN, providing a cost effective integrated navigation and tactical solution to these Canadian projects.”