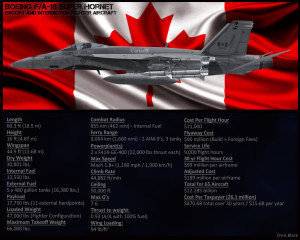 The numbers in Figure 1 are based on details found in the 2011 U.S. Department of Defence (DOD) Selected Acquisition Report (SAR). The fly-away cost was $82.395 billion; with Australia’s roughly $103 million dollars per aircraft for 24 aircraft I decided to roll it back to $90 million for Canada’s hypothetical purchase of 65 fighters. With regard to maintenance costs, the Super Hornet has been right on par with legacy Hornets (based on CF-18 flight costs from the Canadian Armed Forces Operation Impact cost report and adjusted slightly as our aircraft are much older), but I have chosen to drop that from $16,750 per flight hour to $11,000, partially due to this being a combat estimate. A report from Janes, commissioned by Saab, showed an increase in the Super Hornet’s maintenance numbers with a low-end estimate of $9,000 per flight hour and a ceiling around $19,000 per flight hour. I chose a cost estimate which showed a total flight hour cost of $11,000.

The 2011 DOD SAR also quoted 28.3 hours per month (339.6 per year) of U.S. Navy flight time per aircraft with a 20 year service life. This comes to 6,792 hours. The U.S. Navy recently extended the safe service hours total from 6,000 to 10,000 for the legacy Hornets and there are plans to conduct mid-life structural work on the Super Hornets as well to extend their service hours to 9,000 when the time comes.

This is why I chose 9,000 hours. I will be assuming the same for the others since the Canadian Armed Forces determined that this procurement should cover a 30 year window. The Super Hornet, Gripen and Typhoon all have near identical service lives of 20 years, with the Rafale as the lone exception claiming a 30-year lifespan. I am assuming the same work can be done to the others to extend their lives.

The Super Hornet was also designed to be a fighter escort/air interdiction platform and has the ability to engage in air-to-air, although it is designed primarily to destroy ground targets that are not in close proximity to friendly ground forces. This can also be seen in the Super Hornet and Growlers standoff roles within the US Navy’s Naval Integrated Fire Control-Counter Air (NIFC-CA) system. The F-35 and UCLASS drones act as stealthy scouts that relay information and engage only as required while the Growlers jam any enemy air defenses and the Super Hornets fire their long range standoff missiles at identified targets.

The only real advantage that the Super Hornet has is its cost (2nd) and its ease of integration into our existing Armed Forces infrastructure.

As Defensive Counterair (DCA) and Offensive Counterair (OCA) are the main function of Canada’s current fleet of fighter jets (80%), we should be looking for an aircraft that has a primary role as an interceptor with decent air-to-ground capability. This enables us to adequately meet our discretionary NATO roles and coalition support roles.

The Super Hornet would meet our NATO and coalition operation requirements, but it lacks the Within Visual Range (WVR) air combat prowess and raw performance of the Gripen NG and Typhoon. Its inferior thrust-to-weight ratio, acceleration and lower G-load negate many advantages that its slow speed performance grants. Given Canada requires close range visual ID before engaging, any intercepting aircraft will have to get to WVR … so BVR (Beyond Visual Range) is largely irrelevant.

Energy management is essential in a dogfight, and aside from the Rafale, Gripen and Typhoon, the MIG-29, SU-27, SU-30 and SU-35 all have superior acceleration, top speed, G-load and climb performance which translates to better energy management. This greatly increases survivability in DCA and OCA operations in actual combat. The likelihood of actual combat is low, but with the increased threat to Arctic sovereignty and dwindling global resources (Canada has lots) the risk should not be totally discounted.

Despite being designed with escort missions in mind, the Super Hornet just isn’t the air dominance fighter that we need. Its performance is not significantly better than the CF-18 (though it does have a distinct technical edge) and isn’t on the same level as the Gripen NG, Typhoon and Rafale. Beyond being the second-cheapest platform, I don’t really see the appeal in it.

The advanced Super Hornet upgrades and the Growler upgrades are nice, but again, they just don’t offer enough. The Rafale can jam well and Thales is rumored to have GaN systems (Gallium nitride semi-conductors used in radar and electronics) either in the works or in operation. Given the Rafale already has full internal-mounted spectrum jamming systems (Growlers won’t until 2020), it doesn’t suffer from reduction in payload and increased drag.

In the end, we could do better with one of the other platforms. Change comes with a cost, but so does having a fighter that can’t adequately meet your primary requirements.

Shipbuilding in Canada will fail if Industry does not take the lead
F-35: Designed to handle all roles
EP 076: First Arctic patrol ship being assembled and new fighter jets for Canada
Reuters: Canada seen buying fighter jets from U.S., not Europe
Liberal government has 'a plan to build an even stronger military'
1
SHARES
ShareTweetSubscribe