Canada is leaving the Arctic to Russia and the U.S.

The government’s been warning us since 2005: “Use it or lose it.” Back then, it seemed like a fantasy; Russia hadn’t annexed the Crimea, ISIS hadn’t emerged… the world was still a volatile place, but the feeling of impending doom was still a low rumble in our stomachs, not the churning growl it is now. 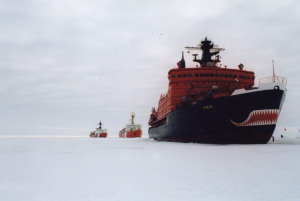 Canada is lagging behind Russia in its efforts to secure the Arctic.

And yet, today, losing the Arctic is starting to feel like a very real threat.

We can thank ourselves for much of that; as NATO members Canada has been an outspoken critic of Russia, and both sides have not done enough to ease tensions.

In fact, thanks to Russia’s annexation of the Crimea, NATO has been able to get back into touch with its raison d’etre — to deter Soviet expansionism.

And it’s been busy, building up its force around Russia, protecting the rest of the world from the threat of Russian aggression.

However, in doing so, Russia has done what any other country would do when surrounded; it’s pouring buckets of money into their military to protect interests and project power.

As an Arctic nation, Russia has also invested heavily in their northern presence and capabilities, planning a new fleet of nuclear-powered ice breakers to support that development.

Even before Russia annexed the Crimea, the U.S. Coast Guard was calling for three heavy and three medium icebreakers to maintain an Arctic presence. Now that the Russians are set to build a nuclear fleet, calls are growing louder for the U.S. to do the same.

And where will that leave Canada? Our icebreaking capability was written into the Canada First Defence Strategy, now a withered old carrot dangling limply from a stick.

Over the next few decades, as the Americans and Russians build up their capability in the Arctic, will Canada have the resources to enforce its sovereignty over our own territory… or will we need to ask the Americans for help?

At this rate, we’ll have to put our faith in the Canadian Rangers, runing along the shoreline shaking their fists at foreign vessels.

No Arctic Tension (in this) Ocean
What’s next for Canada’s northern strategy?
Our Changing North, Our Changing Northern Policy
Working in the Arctic with Canada’s National Research Council
An Out-of-the-Blue Icebreaker Opportunity
3
SHARES
ShareTweetSubscribe