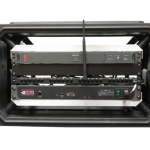 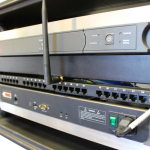 While this unit may not look flashy, it opens up a whole new world for mobile command posts.

If you’ve ever had trouble finding an internet connection, think how hard it must of been for the Canadian Forces to get decent WiFi patrolling the lunar landscape of rural Afghanistan.

Mobile communication systems in the CAF have traditionally been complicated, requiring special training and expertise to set-up and operate. Now, however, one Canadian company out of Quebec is offering a solution to that problem.

The Mobile BPX Communication System, produced by Base Camp Connect, is smaller than a traditional carry-on, yet contains pretty much everything you need to communicate with the outside world, whether you’re fighting fires in Western Canada, or training the Iraqi Army in the Middle East.

Base Camp Connect’s rugged, portable unit can function on several communication platforms — Mobile Networks, Landline Networks, Satellite Connection, Radio and VoIP — and can be set-up in minutes by anyone with enough technical expertise to master plugging-in ethernet cables.

Already in use by first responders and trialled by the Department of National Defence, the Mobile BPX Communication system has patents pending in Canada, the United States, and Europe.

How simulation makes Army procurement better
Mulcair's Military
The threat below: Tech adds new dimension to underwater warfare
Meggitt to train CAF
Innovation is speeding up: Will the RCN be left behind?
0
SHARES
ShareTweetSubscribe