Has the F-35 become indefensible? 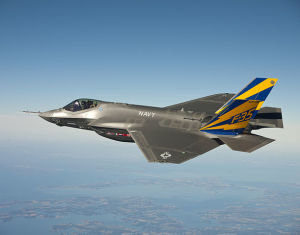 Fighting spirit. The F-35 should have its advocates. Perhaps they can’t be heard over all the noise.

If you have been reading anything from the site medium.com/war-is-boring (or honestly, anywhere else), chances are good that you have already concluded that the Canadian government should reverse its decision to procure Lockheed Martin’s stealth fighter post haste, and opt for the two-engine reliability of a Boeing Super Hornet fleet.

But how reliable is the information you’re basing your arguments on?

Most journalists are generalists. Very few are experts on anything. The majority couldn’t name any of the F-35’s internal parts, and certainly wouldn’t know the first thing about flying a fighter jet. With that in mind, you can chalk up some of the negative PR the F-35 is getting to writers capitalizing on the soft underbelly of an unproven fighter. That happens all the time.

But lately, it’s beginning to look a lot like Canada’s future stealth aircraft is locked in a media death spiral. Even Lockheed Martin’s defence over the frenzy about the F-35 not being able to dogfight seemed half-hearted, and that’s an easy one! The F-35 wasn’t designed to dogfight. How many of our CF-18s have actually entered into a dogfight? When will Canada, and presumably our American ally, ever engage in all-out air warfare with Russia or China?

The F-35 will be used against nation-states or terrorist groups such as ISIL that have antiquated, weak air defences and presumably no air force whatsoever. Can it do that job? Sure. Is it a little pricey? You bet.

The Government of Canada signed on to a developmental aircraft that wasn’t yet in production…and they did so without a competition. But, to their credit, they couldn’t have had a competition anyway, because the F-35 was just a concept. It had taken on physical form by the time then-Defence Minister Peter MacKay signed on the dotted line, but truth be told — and Lockheed Martin will freely admit this — at that time, the F-35 wasn’t even allowed to fly in the rain.

Now here we are, and Lockheed Martin is still working out the kinks in its flagship fighter. And it was within that process, that context, that an early variant of an F-35 went head-to-head with a fighter made by a company that is pinning its hopes on the chance that Canada will cancel the F-35 program.

Whatever evaluation came out of a dogfight between an F-16 and the F-35 should never have been made public, but sure enough, it was leaked to the media with no context and, like a stuck pig being thrown to a pack of hungry wolves, the F-35 was thoroughly devoured.

The fact that an aircraft not designed to dogfight actually lost a dogfight adds nothing to the discourse about whether or not the F-35 is the right fit for Canada.

The F-35 hasn’t reached full production status, and when it finally does, it will have taken 17 years to get there from the point at which it was conceived. Lockheed Martin dreamed big for the F-35, and perhaps their marketing teams took those dreams and made them soar a little higher. Maybe they will get there… who knows?

Many of us have opinions, and very few of us are experts. Peter MacKay has gone on to become the Minister of Justice, and left the F-35 “problem” in his wake, but where are the advisors that sold him on the aircraft… and why shouldn’t we hear from them?

As the F-35 continues its PR nosedive, where are those people who fought hard to ensure the government signed-on to the F-35 program in the first place? Who sold Peter MacKay on the idea, and why aren’t they front-and-centre now?

The US is using tech that could secure Canada's Arctic
F-35 not excluded from jet replacement competition
The Replacements Part 5: Is the F-35 "too good" for Canada?
Charting a course for the CSC
Canadian aerospace firm hopes F-35 program is still alive
0
SHARES
ShareTweetSubscribe