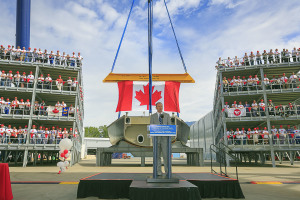 The ship, one of three OFSVs, will be named CCGS Sir John Franklin in honour of the British Royal Navy officer and Arctic explorer.

“Seaspan is changing the course of shipbuilding history on the west coast of Canada, and today’s ceremony marks the most significant milestone yet for the [NSPS],” said Brian Carter, president of Seaspan Shipyards. “This announcement marks the resurgence of sustained employment and long-term economic activity within Canada’s shipbuilding and marine industrial base across the country. Seaspan is proudly building the next generation of vessels for the men and women of the [CCG] and Royal Canadian Navy.”

The three Offshore Fisheries Science Vessels, which carry a $514 million price tag, are expected to be completed by the end of 2017. Those will be followed by one Offshore Oceanographic Science Vessel, the navy’s two Joint Support Ships and a Polar Icebreaker, as well as up to 10 Medium Endurance Multi-Tasked Vessels and Offshore Patrol Vessels for the Coast Guard.

Seaspan says that to date it has signed over 200 contracts with 137 companies in Canada under NSPS work.